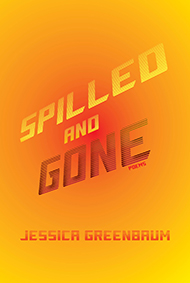 In Spilled and Gone (2019), her new collection of poems, Jessica Greenbaum envisions a Brooklyn that is real and a Brooklyn that is everywhere. She achieves this by a brilliant use of metaphor: her seagulls “wheel like immigrating thoughts,” and a half-moon at dawn is “stuck like a dime in the coin slot.” So, too, her exuberant odes to a potato masher and a stovetop espresso maker raise those mundane objects until they rise off the page. Whatever she entertains — a storm-struck tree, an outdoor concert, her immigrant grandparents, a food truck in Grand Army Plaza — her subject is enlivened by keen observation, a fresh mind, and a vivid sense of place that makes me want to be there, with her, in her world.

Jessica Greenbaum’s poetry has the joie de vivre of New York School poetics, tempered by the griefs and reflectiveness of an experientially tested soul. Confident in craft, substantial of heart, Spilled and Gone is the dexterous voice of a poet calling out to her earthly company of people and things, claiming and praising them. When I read it, I feel myself open and relax into the world.

In her stunning new collection Spilled and Gone, Jessica Greenbaum transcends the limits of ordinary experiences, making of them indelible moments of human boundedness. We feel ourselves breaking in each heartrending line here, as houses crash down next door and lupines are all we have left – and when it seems our very souls might leak away, we are ultimately repaired by the poet’s abiding faith in life and love, like “the trees/themselves, how we depend on them to keep standing around us.” Such is the astonishing healing power of Greenbaum’s poetry, to admit freely our impermanence, and yet always to restore us. 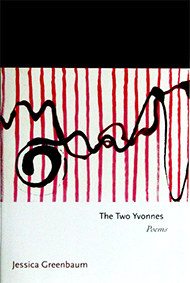 Jessica Greenbaum’s first collection of poems, Inventing Difficulty, winner of the Gerald Cable Book Award, appeared from Silverfish Review Press in 2000; her second book, The Two Yvonnes, has just been published by Princeton University Press as part of its rejuvenated Princeton Series of Contemporary Poets, under the auspices of series editor Paul Muldoon. Many reasons might account for a space of 12 years between one’s first and second books, including the vicissitudes of publishers’ tastes, trends, priorities, backlogs, and schedules; health issues; the birth of children (which can protract yet deeply enrich one’s development as a writer); and the exigencies of making a living. Artistic temperament is another reason. The extraordinary short story writer Deborah Eisenberg, recent winner of a MacArthur genius award, says that she needs time to “grow a new brain” between book projects. My former teacher Donald Justice worked slowly and used to claim that he wrote about one poem a year. I once heard Lucie Brock-Broido say at a public reading that she makes a point of waiting a ritual number of days between the publication of one book and the commencement of the next. And of course it is well known among poets that sometimes it takes a long time for even a gifted, prize-winning poet to find a publisher for the second.

Whatever the reason for the decade spanning the appearance of these books, readers can be grateful that the poems collected in The Two Yvonnes are between covers at last. In it we find Greenbaum, in her clear, Brooklyn vernacular — usually in the first person — exploring the preoccupations of Inventing Difficulty: issues of story and history, of the places that we inhabit and those that inhabit us, especially the specular urban turf of the city. Unlike the kinds of difficulty in poems — contingent, modal, tactical, and ontological — typified and explored by George Steiner in his seminal essay “On Difficulty” (to which her title is clearly a shout-out) Greenbaum’s poems do not obscure with obdurate or arcane language, nor do they encode or leave the reader out, or challenge us with questions about whether or not poems exist at all. The net of language into the worlds Greenbaum evokes is transparent, quotidian, and accessible, which isn’t to say that the poems are not deeply complex and are, perhaps, even more so because of the clarity of their surfaces. “The Yellow Star That Goes With Me,” from Inventing Difficulty, for instance, is on one level a poem about first-world troubles involved as the speaker — thirsty, hungry — takes a crowded train ride into the city, but by the time we reach the end of the trip and return to the title, we realize that the speaker, hyperbolically “dying of thirst” and “absolutely freezing” and “painfully hungry,” carries with her always the truth of other dire train rides to death camps during the Holocaust. The difficult is “invented” here in that we are pitched one thing and given another, but the difficulty is real.

Stylistically, Greenbaum’s second book takes more risks in her treatment of difficulty, ambivalence, and ambiguity than she does in her first book, roughing up the matrix of text, making room for other voices, allowing for greater subjective and nominal vexation and slippage. Greenbaum’s flood subject is the self and other (including the city), and her stylistic project is relational, an impulse that is heightened in the second book, perhaps partly because the subjects she treats require no invention of difficulty. Their concerns are profoundly adult: a sick child, a long marriage, a longer historical memory, and challenged faith. Her largely columnar poems, which are as storied as the buildings (and individuals) about which she writes, move chiefly by relation — phrases like as if, the way, how the abound. “We name life,” she writes in “No Ideas But in Things,” “in relation to whatever we step out from when we / open the door, and whatever comes back in on its own.” She approaches that relativity differently in “Gratitude’s Anniversary”:

One August afternoon, decades before,
when the company of my peers felt like
rows of folding chairs I had to walk between,
I took off my fringed moccasins, climbed
over the corral’s split-post fence, and made
my way through Mr. Tremper’s evergreens
to the stream below, whose song I followed
like the tread of conversation. Hurray
for pine needles, was the message sent up
from the soles, and there was the copse-hidden
brick oven where once we baked a pie from
wild berries. I wasn’t allowed in the woods
alone; I was eleven. When I sat with my feet
in the water, just sat, ho, hum, a langoustine
darted out from a rock, like laughter, and I knew
I had come to a place of thrill and peacefulness,
heaven on earth. That day is related to this one.

The book is more formally fluid than the first, evoking for me the work of Muriel Rukeyser and Denise Levertov; Greenbaum mixes her familiar free verse building blocks with other formal structures, such as sonnets and strophes. The book also concerns itself directly, in poems like “‘This’ and ‘That,’” the abecedarian “A Poem for S.,” and “What For is For” (“A portal with two guards / each turned to their left / they thought they heard / something coming […]”) with language itself. But perhaps it is what happens within the poems themselves, in terms of temporality, narration, story, that is the most exciting development in The Two Yvonnes. The title poem exemplifies the manifold acoustics of the new book and possesses that sense of distinctive benchmark revelation of style Wright spoke of in relation to “Dog Creek Mainline.”

In “The Two Yvonnes,” the speaker mishears and writes down a friend’s recommendation that she read a new translation of a Gogol story called “The Two Ivans.” This mistake (writing “Yvonne” for “Ivan”) gets her thinking about these male and female counterparts, “whatever her story might be / now that both of her exist in ballpoint on a line of notebook paper.” With deft narrative agility, Greenbaum then slips into a vignette about how she is mistaken for someone else, a painter, at a book party. Once the speaker’s identity is sorted out, or we think it is, the friend who does the sorting out remarks on the speaker’s dark hair, further complicating the doubling, mistaking, and tripling going on in the poem, as one person appears to turn into another everywhere. The poem concludes:

Your hair! It’s so much darker! Darker? I asked … hmmmm, I stalled,
trying not to embarrass anyone. Yes! She said, happy to be her honest self,
Much, much darker! You used to have much lighter hair! Who
was she, I wondered, this sandy-haired painter who doubled for me
in their imaginations — the second Yvonne in the new translation —
and who are you? You who I thought the star of my story?

In this poem, and others in The Two Yvonnes, Greenbaum daringly floats her subjects over one another, and with this stylistic risk conveys a vision of the self that is at once coherent and essentially implicated in everything it is not. In “No Ideas but in Things,” Greenbaum writes: “We name life / in relation to whatever we step out from when we / open the door, and whatever comes back in on its own,” a statement that strikes me as an articulation of Greenbaum’s maturing style and stance in The Two Yvonnes. 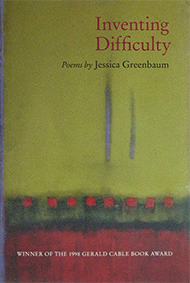 A sinewy, vividly intelligent humanity gives to this collection its memorable voice. In one sense, Jessica Greenbaum’s poems are incisively local—that Brooklyn landscape out of Whitman and Hart Crane. In another sense, however, they tell of the larger sadness and recognitions of our century. They “design their world through love” and scrupulous observation. A first book by a poet very much to be listened to.

In a world both rich in close affections and awash in agonies we know only by rumor or report, Greenbaum writes her best self—eager, playful, responsible, beautiful. We need these poems, that show such power.

I have known and admired Jessica Greenbaum’s work for many years. It keeps getting better—also harder to describe, in its entrancing blend of the hard-edged and lyrical, the chatty and tragic, the passionate and wry. Greenbaum is mistress of a recognizably urban but also piercingly individual style. Her poetry is full of brilliant phrases but it also respects ambivalence and loss, the silences between people and thing, the heartache inhering in the most loving family. Inventing Difficulty is a welcome debut volume by a wonderful poet.

These are tough, passionate poems that spring from an urgency both intellectual and primal. They are wry, hilarious and wacky at times, heartbreakingly sad at others. Jessica Greenbaum brings a sparkling imagination and a vital, divine impatience to American poetry. How we need her, right about now!

A Selection of Poems